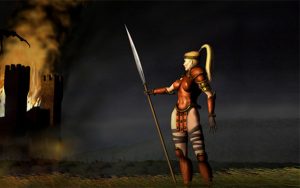 I recently realized that questions concerning PvM Javazons were relatively frequent. In an effort to stack all the necessary information concerning this character, I will consecrate this whole guide to a build that is strictly viable in PvM. Four of my guides were stickied alredy, so I’m getting used to it. I have started planning a Javazon for my younger brother at first and found it quite interesting, so I thought that it could be worthwhile to share the build, even if it might not be anything new for some of you… Anyway, enough blabbering, let’s get to the thick of things!

– The order of the synergies doesn’t matter, as long as you max Charged Strike and Lightning Fury first. They are your main attacks.
– 109 skill points total, achieved at lvl 98.

Strength: Enough to equip your gear
Dexterity: Enough for gear or enough for max block depending on shield used and preference
Vitality: The rest
Energy: 😆

– You have ranged attacks, so you may choose to get max block or not.

– Those are the most useful stats. The fcr may or may not help you whether you’re using Teleport or not. The pierce/mastery adds alot of damage, nonetheless. There are cheaper alternatives, such as the traditional Harlequin Crest, but this will suit us perfectly, so let’s stick to that.

– Each mod is useful, even though +def isn’t so important. You should privilege this one if you’re using Thunderstroke.

– This one will suit you better if you’re using eth Titan’s Revenge and want to get more physical throw damage.

– Faster run walk helps; replenish quantity makes it very good if you tend to abuse of Lightning Fury a bit too much 😆
– It can be ethereal and/or upgraded for additional physical throw damage

– It is obviously better at melee. The pierce on it is nice too.

-There’s no need for 6/40 javelins. Those are excessively expensive, so we’ll leave that to PvP guys.

– Provides a nice resist boost and decent damage along with a little bit of damage reduction. The downfall of it is that it has no ias.

– I would mainly consider it for the strength on level and frw. Teleport can be handy, but the Amazon class has poor fcr frames.

– Opt for this one if you use max block and feel that DR% could help. I wouldn’t use it without max block in fact, just not worth it.
– Socketed with: Ias jewel or Rainbow Facet

– JmoD can provide the best damage boost among all shields while having a nice block.
– Both can be socketed with ias jewels and/or Rainbow Facets

Shield Switch
Lidless Wall, Sigon’s Guard, Splendor,Spirit*) Do not use it unless you have enough strength to do so. It’s not worth wasting massive stats.

Rings
Ravenfrost / Dual leech ring*) Mana steal is excessively important. Those can spawn with great adds such as resists and stats.

– This is needed to get 100% pierce, which is a good chunk of your damage.

Charms
Torch
Annihilus
7+ Java skillers*) Having some free space is handy. Some useful mods would be 7 frw, 6 strength, 6 dex, life.
Resist and life small charms – pump your resists with them if your build lacks some or just get lifers

Notes on the setup: The only downfall of Infinity is its lack of IAS%, that’s why I’m recommending a Tresher (-10 WSM) which is the fastest elite polearm in the game. Andys socketed with an IAS jewel + Treachery allows your merc to reach the 4.5 fpa breakpoint (4.54 attacks/sec.) Treachery + Vampgaze socketed with an IAS jewel gives 60% ias, which is enough for 5 fpa (4.16 attacks/sec.) Your merc also gets up to 35% DR when Fade procs. Andys (IAS jewel) + Fort reaches 5.5 fpa (3.84 attacks/sec.) I wouldn’t recommend Fort + Gaze, since it has a slower attack speed than the other combinations.

Notes: It’s pretty pointless to add IAS charts, since all you want to do is keep him alive.