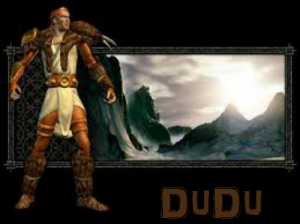 Wat is dis ?
Now is the era of DuDu, those mighty warriors that dominate the Blood Moor’s battles and in this guide I will tell you how you can make your own DuDu b)

Wat is DuDu ?
DuDu is an ancient warrior, the sleeping beast and now it is woken… Beware of those who dare step in front of him.
Generally DuDu is one of stongest Diablo II character and when played correctly, DuDu is invincible b)

Wat DuDu requires ?
For a start notice that DuDu and Dudu / Druid is not nearly the same thing… You maybe have seen a lot of those 99 Fcr and 99 Fhr pathetic Dudu players with funny large Stormshield and say that ” Max Block is way to go… ” *PFFF* slap those noobs and ask them after that ” What is way to go ?!?! ”

163 Fcr and 99 Fhr every day and all the time… There is no other option… Only the 163/99 setup offers you the best way to control your opponent and to humiliate him. It also gives you the opportunity to behave more aggressively, so there is no reason to use the 99/99 setup.

Wat are DuDu’s Skills / Stats ?
Here are some of the points where DuDu and Dudu differ from each other :
Elemental Skills :
– 1 point to Arctic Blast
– 20 point to Cyclone Armor
– 20 point to Tornado
– 20 point to Hurricane
– x point to Twister ( This is your last priority, rest Skill Points goes here. Maxed at LvL 98 so wuhu, 1 extra point left 😆 )

Stats :
Simply… All in Vita dude… This is DuDu, not Dudu…

How DuDu do it ?
Well now we can have a lot of different options so be creative and discuss this openly here, because there is not ” only one way to do it ”
But at start if you want to become a DuDu, you will need a lot of practice b) Because this is not any ” one-night stand ” thing, this is more like ” years thing ” so be patient.
Now next things what you will read are just examples, some things where you can start and to become a better DuDu.

In all match up’s remember use : Oak + Wolf’s / Bear + Poison Creep and Cyclone Armor ( Precast them so often as possible )

DuDu Vs. Amazon :
If it is Javazon you have nice changes to slap her b) Just try avoid her’s namelock ( if telezon ) and dodge those evil Furys.. Bear is maybe more tanky in this match up, but good DuDu will always find hes own way. Be sneaky and don’t stomb, tele next to her and spam 2-3 Nado, after that go to off screen and precast + repeat, not so hard b) If it is Bowzon then this maybe can be a bit harder, because usually good Bowazon will take off your zoo fast with Multiple Shoti / Strafe so you must be much more aggressive. Dont give her a space and stomb her as often as possible + spam Nados and precast zoo same time, that can be tricky first so if you can’t handle it maybe a less aggressive style would be better, do it like vs Javazon b) Vs Bowazon Wolf’s would be better option.

DuDu Vs. Assassin :
Well here you will need to use TG and those 2 x 5 Fhr / 5@ if it is Trapper, because you will need 85% Lr on both sides ( Suicide and CTA ). Reason to this is that you will need a WSG often to out of her Mind Blast.. And vs Trapper that extra 10% Max Lr what TG give is really important, it keeps you alive longer. Basicly if Trapper is aggressive just avoid her, tele shortly to down and make up Nados while WSG away from Fhr lock, remember precast zoo and stomb her when you have change to it but after that go off screen to precast and start over. If it is Hybsin then it can be tricky because those will cause a evil OW and Psn with Whirlwind, TG is not must in this match up, but maybe can be handy. You will maybe need to be more aggressive and stomb often than vs Trapper, because if you play deff alot you will probably just kill yourself since Hybsin can just watch and wait when OW and Psn take of your life pool 😀 So stomb when can and stay off screen for precast, spam Nados and WSG out of that Mind Blast. If it is Ghost… You don’t have a much changes at start because it will be your hardest much up, especilly if Ghost know how to hande a Druid. Getting to know your opponent and his weaknesses will help you a become stongest DuDu ever and with a lot of practice at some day you will slam those Ghosts. Vs all Sins Wolf’s would be better option.

DuDu Vs. Necromancer :
Well if it is basic Bone Nec, you can easy slap him. Just be aggressive, stomb often and keep your zoo up, after few duels you will know what kind deff Necro will play and with that info this much up comes more easy to you. BUT beware, some Necros can be really good and not so easy to win… In this match up you can test if ” Werebear + Shock Wave ” stun will work. If it is Psn Nova Nec then just when you have stop laughing stomb and slam poop out if him 😆 Vs Nec Wolf’s would be better option.

DuDu Vs. Sorceress :
Well Sorc can be pain in ass… Es Sorc can tank a lot of Nados but in these match up’s ” Werebear + Shock Wave ” stun would be a great advantage, it will cause to Sorc stop what ever she is doing and this will give you a change a slap her hard. Vs Fire Sorc Bear is maybe better meet wall and vs Lite / Cold Wolf’s can be more handy. Find your own way in those cases. Vs Lite Sorc TG and 2 x 5 Fhr / 5@ Sc’s can be usefull. Vs any Sorc aggressive game style is maybe better, tele next to her or stomb -> make ” Werebear + Shock Wave ” stun -> spam Nados, after that precast if needed and repeat. Basic 105 / 117 Fcr Sorcs are not so hard but example 200 Fcr Vita Fb’r can be anoying.. Just practice alot vs them.

DuDu Vs. Paladin :
Well as we all know, 90% of these match up’s will be against Hdin… So what you will need here is Wolf’s ( 3 of them minimum all the time so precast often ) and now days many Hdin will Smite you immediately and after that make FoH lock if you stomb them, so i recommend that you will tele to blind spot ( example under to Hdin ) and spam 1-2 Nados and after that go to off screen for precast and repeat. If it is good Hdin and shortly tele up while making hammer field then it maybe can be more tricky, then tele to left side would be better option. Vs Smiter you maybe can have some problems because usually they use Exile vs you ( Life Tap ) and they will probably try Charge you.. So play more deff and spam Nados + precast. Find your own way. Zealer would be easy, just don’t stomb him. Tele next to him and spam Nados + precast zoo when needed. Vs all Paladins Wolf’s would be better option.

DuDu Vs. Druid :Well melee Druids are like Zealots, easy to beat but since they have that Rabies, it can be a bit harder. Avoid those strikes and you should beat him easy. If it is some Windy Druid then remember that DO NOT stomb 😀 just be smart and wait until he comes too close and then slap him with Nados. Bear would be better tank in these match up’s. Dear God if it is other DuDu… It will be like nuclear war… Only one can survive in this case and only one can be The DuDu.. So just practice and remember to use Bear instead of Wolf’s and DO NOT stomb. In this match up ” Werebear + Shock Wave ” stun can be handy. Vs Fury / Rabies Druid Wolf’s would be better option.

Wat is ” Werebear + Shock Wave “combination ?
” LoL wut wat ” Well yeah, do you even DuDu ? It is 2014 bit*hes and using Volcano for stun is old school what moust of Dudu players use. Stun with Sock Wave is much more effective but a bit harder to learn. Simply you just change yourself a Werebear and make ~3-4 Sock Waves and after that you must change yourself back to human form and spam Nados.
One video will tell to you more than thousand words ( It’s mine m8 old video but you can see clearly how this thing works) :

The End ?
Well what i can say here is that if you have never tried DuDu, you should give it a chance and try it out.
But remember : ” Great power brings great responsibility.. “